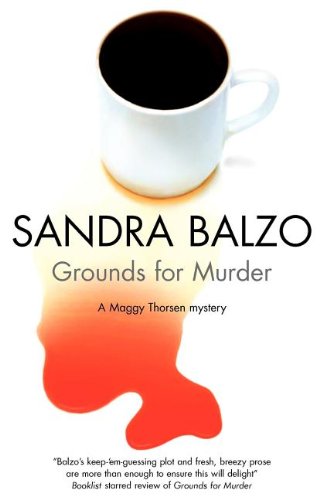 ‘Slut in a cup!’
It might sound like an expletive, but my friend Sarah Kingston meant . . . Well, I wasn’t sure what she meant.
‘Are you nuts?’ I hissed. ‘It’s Marvin LaRoche. And he’s dead.’
I was trying to keep my voice down in an effort to appear calm. The packed bleachers in front of us held nearly two hundred spectators, all of them staring open-mouthed at us, like we were actors on a stage. Which we were.
Sarah and I stood stage right, holding up opposite ends of the table bearing the trophies for the Second Annual Barista Competition at Java Ho, the specialty coffee convention. A barista is the equivalent of a coffee bartender, with espresso taking the place of alcohol.
The audience had probably assumed we were shifting the table in preparation for the awards ceremony that would follow the morning’s finals. The truth was, though, I’d found an oval stain smack dab in the middle of the stage and – obsessive personality that I am – I had to camouflage it.
Putting the trophy table, with its floor-length white tablecloth, over the stain had seemed just the thing. Unfortunately, when we’d lifted the table from its original position, we revealed something nobody could cover up.
Marvin LaRoche, head judge and Java Ho organizer, was lying face up, his burgundy tie flipped over his shoulder. The man was slightly cross-eyed in life, and now his blue eyes seemed to be trying to get a good look at the two bloody dents in his own forehead.
I shivered.
Sarah glared at me. ‘I know who it is, Maggy, and even I can tell he’s dead.’
She’d been in a vile mood ever since I’d commandeered her from the exhibit hall to track down LaRoche for the finals. You’d think she’d be happy now that we’d found him.
Sarah nodded toward the biggest trophy, which had fallen over when we’d picked up the table. ‘I’m talking about the murder weapon.’ She dropped her end, and the smaller runner-up trophies toppled over even as the first-place prize began to slide.
‘Dammit, Sarah . . .’ I protested, like it really mattered at this point. I mean, stiff on the floor trumps statues on the table, right? Nonetheless, I dropped my end, too, and instinctively grabbed for the trophy. I had to lean across the table, propping myself on my left hand to catch with the right.
‘Got it,’ I said triumphantly, straightening up with the trophy. Feeling something sticky on my left hand, I looked down at the table where it had been standing.
The trophy, when it had fallen over, had left a thick ring on the tablecloth – the kind a wine glass might make if it had been overfilled. With red wine. Thick red wine.
And that wasn’t the only thing being thick. Now I finally understood what Sarah had meant.
I looked again at LaRoche on the floor and then back at the barista competition’s first-place trophy in my hand. Slut in a cup, as Sarah had called it.
The fifteen-inch bronze sculpture was an artist’s rendering of a barista rising like steam from a coffee cup. Since baristi come in both genders and all shapes and sizes, the trophy’s steamy barista was supposed to be generic. Unfortunately, the unisex steam-barista had . . . well, boobs. C-cups, if I was any judge. Since it had been too late to do anything about the mistake by the time it was discovered, I’d resigned myself to taking some flak over it.
Still, I hadn’t expected anyone to try to bury the boobs in Marvin LaRoche’s forehead.
The faintest of tinkling sounded behind me, the only noise in the stunned silence. I twisted around to see the six barista finalists huddled behind us. One was Janalee, LaRoche’s wife. She was holding their infant son, Davy, and looking dazed. Next to Janalee was LaRoche’s star barista, Amy. In contrast to Janalee’s stillness, Amy’s multiple piercings – six thin gold rings lining the rim of her right ear, three the left and two in her lips – were quivering so hard she sounded like a human wind chime.
As if on cue, the baby started to whimper and Janalee LaRoche began to scream.
The commotion was enough to make Kate McNamara, newspaper editor-cum-cable-access TV reporter, abandon lecturing her young camera operator and finally take notice of what was going on.
Galvanized, as any good former public relations practitioner would be, by the TV camera now being leveled in my direction, I looked out at the hushed crowd in the bleachers. No one had so much as pulled out a cellphone to call for help. A couple, though, were using theirs to take photos.
I sighed. Apparently, since I, Maggy Thorsen, was in charge of the barista competition, I was also the go-to gal for corpses.
‘Call 911,’ I said, a familiar chill crawling up my spine.
This was all Caron’s fault. Again.
Why – oh why – hadn’t I just said ‘no’. . .?
Browse Sandy's Titles