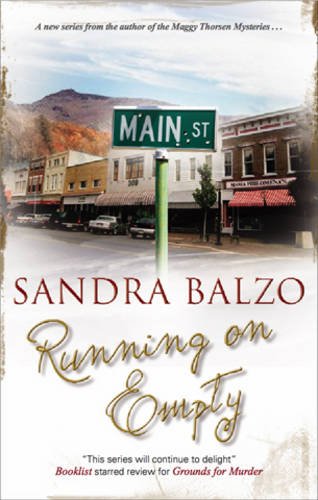 Life on Main Street has always been inexplicably hazardous, no matter the season. The skier who choked on her gum halfway down Deer Slope, arriving at the bottom still standing, if not breathing. The fishermen squashed like road-killed possums by a Toyota Land Cruiser against the front of Lucky's Bait Shop. The skinny-dipping White Tail Lodge hostess, dead from hypothermia. And that didn't count the odd tourist or two each year wandering into the mountains, never to wander back out to our High Country version of civilization called Sutherton, North Carolina.
Nonetheless, the day Daisy Griggs reportedly siphoned nearly three pints of blood out of poor Mrs Bradenham during the town's annual volunteer blood drive is generally acknowledged to stand above them all.
It's also what was sending me, Daisy's daughter AnnaLise, back to Main Street . . .
AG

AnnaLise Griggs stood in a Wisconsin courthouse when she picked up, on the first ring of her cellphone, the call every adult child dreads.
'AnnieLeez? This is Mama,' her mother's oldest friend said on the other end of the line.
Mama was the only person in Sutherton--or anywhere else--who seemed constitutionally incapable of pronouncing AnnaLise the correct way: 'Ah-nah-lease'. But, as surrogate-daughter had all her life, AnnaLise let her surrogate-mother's butchering of the given name ride. 'I just have a second, Mama. Is everything all right?'
'Pretty much. Excepting Daisy, she went and drained all the blood out of Mrs Bradenham.'
Well, maybe not the call every adult child dreads.
'My mother what?' AnnaLise yelled.
Other occupants of the century-old, cavernous lobby turned, en masse, to give the newspaper reporter a dirty look. They themselves might be junkies or prostitutes, purse-snatchers or axe-murderers, but blare into a cellphone and everybody becomes Miss Manners.
AnnaLise pivoted to face the dirty beige wall, still keeping one eye on a courtroom door in case Urban County District Attorney Benjamin Rosewood emerged through it. The prosecutor had just filed charges against a sixteen-year-old girl whose car skidded on wet pavement and jumped a curb, killing her friend.
Tragic, yes. But vehicular homicide? Not in AnnaLise's mind, but reporters weren't supposed to have opinions. Which is why AnnaLise buried hers in a personal journal, thereby keeping the top of her head from blowing off.
At least, until now.
'Your mother,' Phyllis 'Mama' Balisteri continued, 'she was working the blood drive like always, her being a lobotomist and all. But Daisy made a terrible, terrible mistake this time.'
Despite her occupationally imposed if personality-driven need to edit , AnnaLise also let ride 'lobotomist' versus 'phlebotomist' and cut to the car chase: 'Is Mrs Bradenham OK?'
'Oh, sure.' If anything, Mama sounded a bit disappointed. 'But there was blood all over the floor from running out the tube. Daisy up and cut it in the wrong place, you understand?'
AnnaLise didn't understand, but Mama wasn't going to give her a chance to request any clarification. 'Henrietta--the other lobotomist?--she said it looked to her like three, maybe four pints.'
Three to four pints? Didn't the average person have only nine or ten total? AnnaLise tented her forehead against the beige brick, trying to ignore both the explicit graffiti on it and the heightened activity in the courthouse lobby. She did register two videographers lift their cameras and train them on the arraignment session door.
'Where's Daisy now?' AnnaLise asked in a tone that already sounded tired, even to her own ear.
'Don't you worry,' Phyllis said. 'I didn't let the chief's police boys take your mother away.'
Assuming 'the chief' was still Chuck Greystone, AnnaLise's high-school sweetheart, he certainly shouldn't have, at least not without calling.
'She's here at the restaurant with me,' Mama continued. 'But Dr Stanton, he says Daisy might not be quite right.'
'Right?'
Mama lowered her voice. 'You know, like . . . in the head?'
AnnaLise didn't answer, waiting one, two beats, as DA Ben Rosewood burst from the courtroom and, throwing AnnaLise an apparently offhand glance, exited the lobby via another door, all without breaking stride. Shouting questions, a group of her fellow reporters became more like a pack of wolves, running their quarry to earth.
Feeling even smaller than her five feet of height, AnnaLise stayed where she was, a human lean-to against the building's scarred wall.
'I'm coming home, Mama,' she said softly into the phone. 'Tell Daisy I'm coming home.'
Browse Sandy's Titles