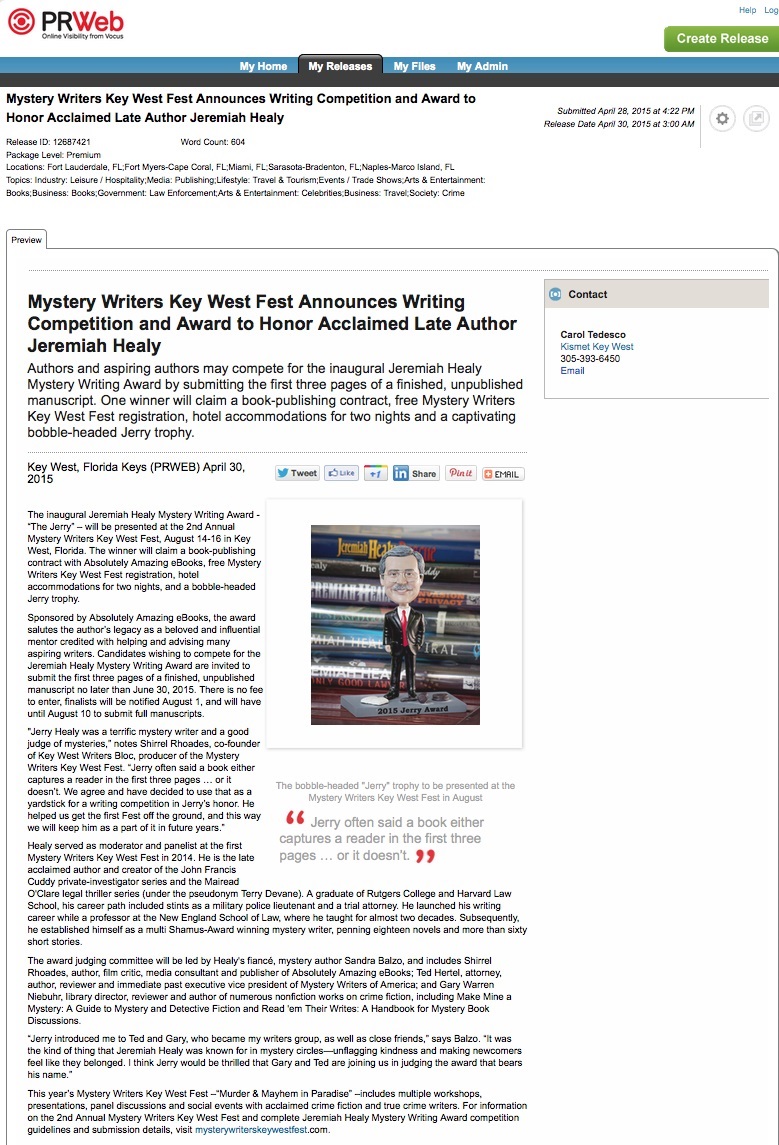 Sponsored by Absolutely Amazing eBooks, the award salutes the author’s legacy as a beloved and influential mentor credited with helping and advising many aspiring writers. Candidates wishing to compete for the Jeremiah Healy Mystery Writing Award are invited to submit the first three pages of a finished, unpublished manuscript no later than June 30, 2015. Finalists will be notified August 1, and will have until August 10 to submit full manuscripts.

"Jerry Healy was a terrific mystery writer and a good judge of mysteries,” notes Shirrel Rhoades, co-founder of the Mystery Writers Key West Fest. “Jerry often said a book either captures a reader in the first three pages … or it doesn’t. We agree and have decided to use that as a yardstick for a writing competition in Jerry’s honor. He helped us get the first Fest off the ground, and this way we will keep him as a part of it in future years.”

Healy served as moderator and panelist at the first Mystery Writers Key West Fest in 2014.  He is the late acclaimed author and creator of the John Francis Cuddy private-investigator series and the Mairead O'Clare legal thriller series (under the pseudonym Terry Devane). A graduate of Rutgers College and Harvard Law School, his career path included stints as a military police lieutenant and a trial attorney. He launched his writing career while a professor at the New England School of Law, where he taught for almost two decades.  During that time, he established himself as a multi Shamus-Award winning mystery writer, penning eighteen novels and more than sixty short stories.

“Jerry introduced me to Ted and Gary, who became my writers group, as well as close friends,” says Balzo.  “It was the kind of thing that Jeremiah Healy was known for in mystery circles—unflagging kindness and making newcomers feel like they belonged. I think Jerry would be thrilled that Gary and Ted are joining me in judging the award that bears his name.”