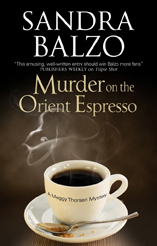 MYSTERY SCENE REVIEW OF MURDER ON THE ORIENT ESPRESSO

As a big Hercule Poirot fan and an inveterate punster, I was immediately drawn to the title of this mystery about a coffeehouse owner and her husband attending a mystery writers’s conference aboard a night train to nowhere in the Florida Everglades.

Maggy Thorsen’s beau, Sheriff Jake Pavlik, is scheduled to be one of the guest speakers at this faux re-enactment of Christie’s classic when, you guessed it: a real murder occurs. To make matters worse, a sudden rainstorm washes out the tracks, leaving the attendees stranded on a train with a murderer in the middle of the crocodile- and python-infested Everglades, and no way to communicate with the outside world.

A first person narrative such as this depends to a large extent on how well you like the narrator...and I liked Maggy. In addition to having a strong sense of curiosity and intuitiveness, which most amateur detectives need, she’s also mostly kind and funny, but she can become a bitch on wheels (pardon the pun) when called for.

There’s certainly enough danger and more than enough suspects to keep the reader entertained throughout this eighth Maggy Thorsen mystery. I particularly enjoyed the list of characters—and the characters they portrayed in the re-enactment—listed in the front of the book, along with a drawing of the train showing where the various cars were situated. As in the classic, the murder victim here was not well liked, and each of the suspects interviewed had a good motive for killing him...which made identifying the murderer a challenge. And, oh yes, there really is an espresso bar aboard the train. All aboard!