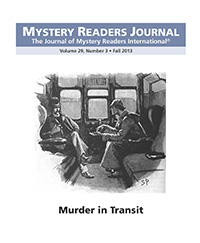 RESEARCHING TRAINS FOR MURDER ON THE ORIENT ESPRESSO

The new issue of Mystery Readers Journal has a fun article about my researching of trains (sometimes cluelessly) for Murder on the Orient Espresso. Here's an excerpt:

"Thanks so much for talking to me, Kevin," I started out. "Now as an engineer you'd be in charge of the train, correct?"

"No, actually the conductor is. I take orders from him or her."

I looked at the phone. "You mean the person collecting the tickets?"

"Well, yes. The story is set in the Everglades, so they wouldn't be going over a bridge or--"

". . . on the ground," I finished for him, making a note. "Perfect. Now if you were 'on the ground,' how would dispatchers know where the train is? GPS?

"I suppose new trains will have GPS. But traditionally, the train breaks an electrical circuit on the track as it passes certain points--what we call 'knocking down a signal.'"

Cool. "And if you didn't knock down the next signal, they'd know something was wrong?"

"As well as what block you're in."

"Block?" Phone on speaker now, I was scribbling furiously. "Like a city block?

"A block is a segment of the route. Block A, Block B and so on. They don't correspond to street blocks."

"I guess that makes sense, given you're not traveling on streets. Oh, before I forget: Can you tell me where the odometer is located on the instrument panel?"

"There's no odometer in the locomotive--at least one that the engineer has access to."

Huh. "But how do you know how far you've traveled?"

I can only imagine Kevin's pitying look. "Umm, a train travels on a track from station to station. Over and over and over again."

"Ohhh." Light dawned. "So you're saying it's not as if you need to turn left in, say, two miles?"

Not really, but it was nice of Kevin to think so. And even kinder of him to continue gently correcting my misconceptions and answering my questions.

But those questions--and, more importantly, the answers and where they took the conversation--resulted in corresponding twists in the book. Things that even I didn't see coming.

Which just goes to show: Sometimes starting off on the wrong track takes you exactly where you were meant to go in the first place.